The Chicken or the Egg?

What came first - the chicken or the egg?

That age old debate can easily be applied to when we have projects which we want to work alongside Arts Award. Whether within pre-existing programmes at the arts organisation or when developing new programmes there are two questions to consider:

Do we make the project fit Arts Award?

DO we fit Arts Award around the project? 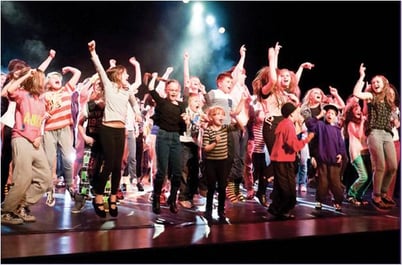 For example, we have our ‘film in a week’ which is usually run during the half term. How does that map across to Bronze Arts Award without losing some of the key elements of what we are teaching? But at the same time, the young people are learning new skills, meeting artists and sharing what they have learnt with their peers – all of which could be used towards Bronze. We also host quarterly ‘Slam’ events where we showcase all the work from the various groups around The Core, which all participants are invited to.

So how hard is it to incorporate Arts Award?

Taking the example of the ‘Film in a week’ above, it would seem that with some minor adjustments we can easily align this with Bronze Arts Award. Part A could be about the new skills they are learning during the project; Part B could be the opportunity to see the ‘Slam’ where their work is likely to be screened; Part C could be someone they are already inspired by, or someone new they discover when researching different filming or acting techniques; and Part D could be incorporated into designing help guides on filming techniques such as lighting or sound, and shared back to the group.

It sounds easy doesn’t it?

Yes because, with some planning, we can cover the additional subjects and requirements for Bronze; and no because we will need some additional funds, resources and time. 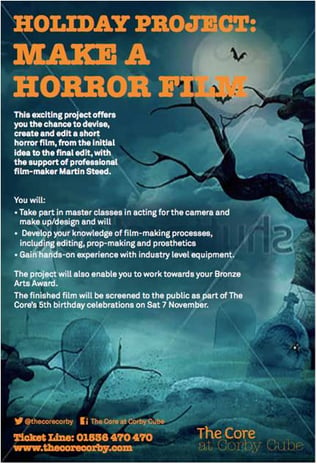 At The Core we are very passionate about engaging with young people from all walks of life and experiences and making art accessible to all. Recently we’ve completed Gold adviser training, and are coming off a successful first moderation. We also have an amazing workshop leader who delivers first class projects in tight schedules.

This all coincided with TACT Fostering & Adoption Agency approaching us at The Core to work with some of their young people on a project. Our ‘film in a week’ over October half term was a good fit, and would be perfect to trial running our first intensive Bronze Arts Award.

The snag was funding needed to pilot this ambitious new approach for us. Upon researching options available I found that there was the Arts Award Access Fund, a small grants scheme aimed at supporting young people who might be experiencing barriers to accessing Arts Award and the arts.

Before applying for the funding we needed to ensure that we could deliver Bronze Arts Award, and because of the group of young people we were working with we also needed to put the necessary safeguarding arrangements in place.

We set up a meeting with Martin (our film maker) and Emma (TACT), as well as bringing my trusty Bronze Adviser toolkit. Martin raised concerns that it would be tricky enough to produce a film in a week without adding in the extra few sessions needed to ensure the Bronze Arts Award is achievable.

After many cups of tea and almost a packet of biscuits, we came up with the plan of adding in a pre and post session, as well as having trained Arts Award adviser in some of the sessions during the week.

The pre sessions would also serve as an introduction to Arts Award, the project, the camera equipment as well as each other. Hopefully this will mean that when the October holidays start we can crack straight on with making the film as Martin will have a good idea of what direction the group want to take and everyone has had a chance to meet each other.

The post session will be the opportunity for Arts Award advisers to collate the evidence, get personal reflections and to allow the young people to share skills that they have learnt. An adviser will be on site in the afternoons of the filming project to take photos and help the young people keep video diaries etc.

We are also planning at our 5th Birthday celebration a special screening of the completed film to parents, carers and the young people, with another screening at the ‘Slam’ event in November. This is also an opportunity for one of the young people at The Core working on their Gold to learn skills relevant in the arts world.

We were successful in our bid to the Access Fund. Watch this space to see how we get on!