Karen MacDougall from MacDougall Art tells us about the Hadrian’s Cavalry Project and how she managed and worked closely with a large group of partner organisations and schools to achieve 229 Discover Arts Awards!

What is Hadrian’s Cavalry?

Hadrian’s Cavalry was an ambitious and ‘dispersed exhibition’ of national and international loans - displayed in ten museums along Hadrian’s Wall. Hadrian’s Wall is a spectacular World Heritage Site, stretching over 70 miles from the Solway Firth in the West to Wallsend on the East Coast. The five museum organisations; Senhouse Roman Museum, Tullie House, English Heritage (Houseteads Fort, Chesters Fort and Corbridge Roman Town), The Vindolanda Trust (Vindolanda and Roman Army Museum), and Tyne & Wear Archives and Museums (Great North Museum, Segedunum and Arbeia) all had varying levels of experience with Arts Award. However, for this stand-out project they wanted to deliver an Arts Award project that mirrored the exhibition itself across all the venues, therefore the decision to employ me was made, ensuring that there would be an identifiable feel and that each contribution was part of a larger whole.

My brief was to work with ten museums and/or archaeological sites along Hadrian's Wall, exploring different aspects of Roman Cavalry at each location and to work with schools or community groups ensuring that each young person was given the opportunity to achieve an Arts Award Discover. There were six primary schools and one Girlguiding District (Rainbows, Brownies, Guides and Senior Section) that took part in the project. There was a mix of children from urban and rural areas, drawn from either side of Hadrian’s Wall across the country.

Young people experienced the sites, learnt skills and created a site-specific artwork for each location. This was a challenge both in terms of geographical distance and organisation and as a result required some careful planning. An important part of this Arts Council England funded project was to build in the delivery of an Arts Award within a heritage setting and to promote this, in addition to making art. The project was fully funded, allowing schools/groups to take part for free and transport costs were also covered where necessary.

Each artwork we made became part of the international Hadrian's Cavalry exhibition and was on public display from April to September 2017 at seven different locations along Hadrian's Wall in Cumbria and Northumberland. Some pieces were also legacy artworks for permanent display in the museums. This created opportunities for young people to revisit the museum with the school or their parents, so they could see their work on display. The children were really proud to see their work on public display.

The museums/sites chose their partner school/group with the aim of working with new partners or to further develop existing relationships. For example, The Roman Army Museum selected Girlguiding Haltwhistle as their partner because they wanted to challenge the assumption about girls not visiting military museums - the girls had a great time, evidenced by their comments afterwards;

"We had such a great time and the embossing was really cool. I have never tried anything like this before."

The schools had either recently covered the Romans as a topic or were planning to. Each school/group had a one day visit and preparatory activities, usually in the museum, followed by two days of workshops working with myself and supported by museum staff.

Roman Army Museum and Girlguiding Haltwhistle challenged gender stereotyping and looked at the Roman Cavalryman and his horse. I taught metal embossing skills and the participants each created a metal chamfron inspired by their museum visit. These were displayed in the gallery after the exhibition finished.

All young people completed an A3 Roman Cavalry Arts Award worksheet, which gave an overview of the project with tick boxes, places for photos, drawings and written reflections. This provided a low-cost framework for the portfolio and we discussed this being an ‘index’ to be added to with sketches, photos and text from the inspirational museum visits and design ideas.

Arts Award was completely new to most of the schools and certainly to the teachers of these classes. We assessed the portfolios with the museum staff and discussed and evaluated the project together which was really useful for everyone.

I think one of the best things about Arts Award is that it encourages children to reflect on what they know and to try new things – they have to think about what they have done, what they could have done differently and where they could go next. Collaborating with other Arts Award centres and supporters is a fantastic way of enriching a project and meeting new colleagues! Some of the positive feedback we received during the project;

“The children are thrilled with the finished result and it is great publicity for the school. The best part has been observing the children's enthusiasm for the project and overall engagement. The staff have also learned to manipulate willow so can apply it to other contexts.” Alex Moore, Year 5 teacher

“Thank you for including us in this project. The children have gained so much from this opportunity and we already have plans in place to aim for the Artsmark Award next academic year.” Headteacher Susie Drake, Haltwhistle Community Lower School

“The decision to use Karen across the partnership led to high quality artworks that were very much part of the exhibition in their own right, but were also clearly created by children – surely an example of the Arts Award process at its very best.” Bill Griffiths, Chair of Hadrian’s Cavalry Project Board and Head of Programmes & Culture Bridge North East at Tyne & Wear Archives & Museums.

The project was funded by Arts Council England, through their Museums Resilience Fund. It features loans from across Europe and saw visitor figures to the venues increase by 12% on the previous year.

All photos by Karen MacDougall

Why careers in the arts matter 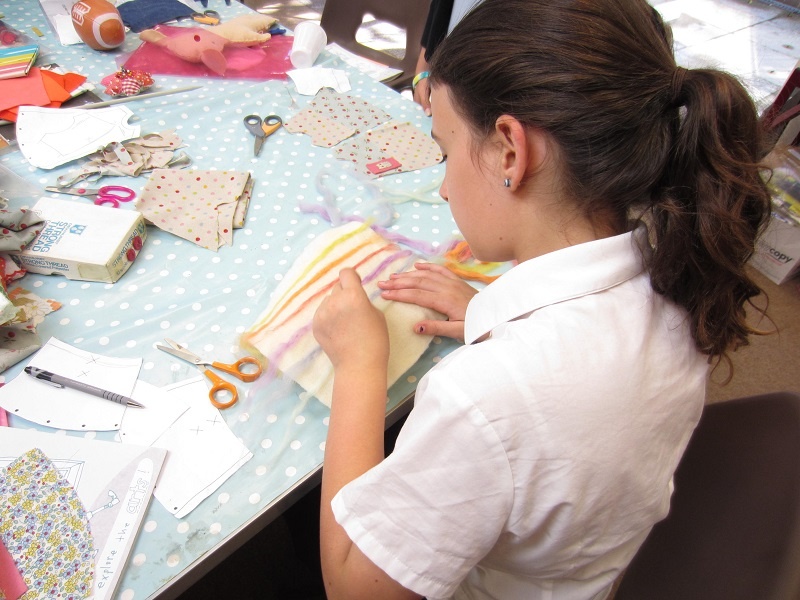